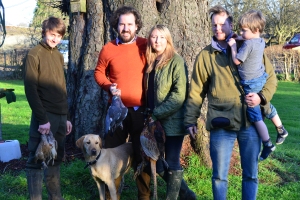 The Saturday just gone saw our annual walk about shoot at the farm. It’s a bit of a joke, and we never expect much – in the past my father used to put down partridge and pheasant and we rarely got more than a bag of 10 or 11, even if we had a duck flight in the evenings, and so it eventually morphed into a yearly walking of the hedgerows.

However, 2013 saw a bumper year on the farm for the wild pheasant population, and I released nearly 50 English partridges, with the intention of trying to re-establish them in the area, so it was with some optimism we left the farm house at around 11am.

In the field was my wife Abby, my good friend from university Jon Drury, my falconry apprentice Harry, (otherwise known as Baldric) and myself. The canine “helpers” were my wife’s 10-month old King Charles Jasper, and Boris – the newest addition to our family, collected only the day before from a good friend who’s work has taken him away too much (thank you Mr Peppit – Boris is amazing).

The first “drive” was disappointing – all we saw was one rabbit, homeless because of the high water levels in the boundary ditch. We went on to another thick boundary hedge, and another, and eventually I flushed our first pheasant – two shots fired, but nothing in the bag. The next drive was no better and I was beginning to be concerned someone had told the pheasants we were coming.

On our penultimate drive, I dispatched Jon and Abby to stand in the empty sodden fields on the opposite side of the moat (an ancient monument on the farm). Harry, the dogs, and I went around the other side. On our way, an unfortunate wood pigeon passed by about 50 yards away, and one shot later, it splashed down in the water. I sent Harry around the other side, while Jasper, Boris and myself went into the overgrown center of the moat – I could only shoot in one direction, but hoped we would send the birds out every which way. At first that’s exactly what they did – Jon was the first to get a go, then Abby and Harry all had shots. Suddenly, as if from nowhere, 12 or 14 pheasants rose out in groups. I picked out the cock birds and added two more to to the bag, missing a third. I tried to get our highly trained Boris to retrieve the first pigeon that was now stuck in some rushes on the far bank of the moat. He could not see it, so I took an empty cartridge from my pocket, and threw it towards the dead bird, yelling ‘fetch’. It landed inches from the pigeon and I hoped he would see the pigeon. But no, a perfect water retrieve of 1 shotgun cartridge. I went back out of the moat with the dogs, picked up my two cock pheasants and walked around to see what the others had got. Unfortunately only I was in luck and, as usual, got a ribbing from Jon, as this seems to always happen when we’re out hunting together.

Thanks to GWCT and lauriecampbell.com for this cheeky English partridge shot

For the last drive, we had seen a covey of English partridges head into it as we approached the moat, so I was full of hope, as it’s also where the majority of the escaped pheasants ended up. I lined the guns out again, putting Harry and Jon in the spots I thought would be best, as this was Abby’s first time shooting at birds rather than clays, so I placed her where I thought she may get the odd shot at partridges returning to the water. The dogs and I were to be the beaters and within a few strides of entering the dried undergrowth, the partridges were off. They broke perfectly over the hedge for Harry who expertly took out a brace (how many of us can say their first left and right at partridges were English, and he’s only 17!). Boris and Jasper put up a few more rabbits and eventually I found a hen pheasant which, at first, looked like it was heading for Abby, but turned away to the safety of the menage. This brought an end to our walkabout – a small bag but great fun was had by the guns and dogs.